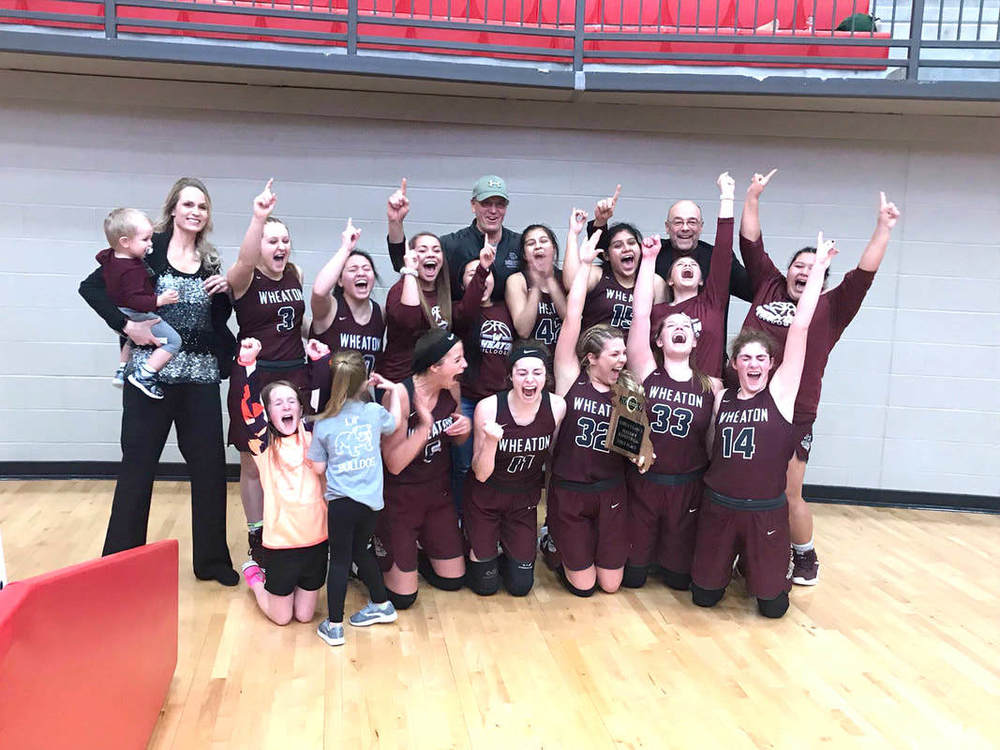 It was a moment years in the making. This is why players shoot literally thousands of free throws in practice over a career.
The Wheaton Lady Bulldogs fought back from an 11-point second quarter deficit, then nailed 13 of 15 fourth quarter free throws to claim a 60-54 victory over the top seeded College Heights Lady Cougars on Saturday night in the Cardinal Dome at Webb City. This championship was won at the line, where the Wheaton girls calmly hit 20 of 23 tosses for the game. College Heights hit only 9 of 18 attempts, wasting a 27-point performance by Emily Colin.
It was the first district basketball title for the Lady Bulldogs since 1994, coming after Wheaton lost in championship games the last two years. Wheaton lost to Walnut Grove in Class 1 District 5 finals both times: 71-47 in 2018 and 64-29 in 2017.
Wheaton met the stat requirement, scoring 60 against the powerful College Heights girls. Jessica Lombard’s girls are now a perfect 13-0 this season when they score 60 or more points.
What. A. Game.
The Class 2 District 12 girls basketball final pitted Wheaton against College Heights. Purdy’s post-season party plans popped when Wheaton poured a 59-40 semifinal win on the Lady Eagles’ parade.
Saturday’s title tilt saw the 20-7 Lady Bulldogs taking on the 19-7 Lady Cougars in a rematch of their January 25 contest, won by College Heights, 56-44.That game was representative of a crazy year in the Ozark 7. It was a year where Wheaton lost to both College Heights and McAuley, then beat Verona, a winner over both Joplin private schools.
College Heights is all about the inside-outside tandem of Colin and Grace Bishop. The dynamic duo poured in 41 of the 54 points for the Lady Cougars. While Wheaton’s Hallie Mitchell was deadly from both the free throw and three point lines, she had a lot more support from the balanced Lady Bulldogs attack.
The first quarter saw a toe to toe battle, with Wheaton taking a 10-9 lead when Rachel Lacey followed a miss at the 2:05 mark. But College Heights, led by Colin’s 9 first quarter points, scored the next three baskets. Then, Mitchell drove and willed in a hook from the right side of the lane as the clock expired to cut the lead to 15-12.
Colin was a beast on the boards as well as in the scoring column. The Lady Cougars owned the boards at both ends, and thwarted the Wheaton inside game with intimidating blocks. A 12-2 run gave College Heights a 21-12 lead, a lead that grew to 27-16 when Kaynahn Burk converted a strip steal into a snowbird layup with 3:40 left in the half.
Mitchell finally connected from three land, and she and Rachel Lacey sank free throws to cut the lead to 29-23. Monica Hinojosa added to the scorebook with the last bucket of the half, pulling Wheaton closer at 29-25.
Zoie Simpson scored on back to back possessions to complete a 13-2 Wheaton run and tie the score at 29-29. Colin answered with a pair of treys in the next two minutes to guide the Lady Cougars back in front, 37-32.
The Cardinal Dome, with its deep backdrop behind the goals, stymied outside shooters throughout this tournament. But           Tori Goostree busted the net with a bomb to cut the lead to 40-37 at the 1:54 mark, then Mitchell drained back to back treys to give Wheaton a 43-40 lead.
It was a short lived lead. College Heights came up with back to back steals and layups to push back in front at the final break, 44-43.
A game of skills became a battle of wills.
College Heights used an 8-0 run to grab a 48-43 lead when Colin raced coast to coast for a score. But free throw shooting brought the Lady Bulldogs back.
Mitchell sank a pair. Then Lacey hit the front end of a one and one opportunity to cut the lead to 50-46 with 4:51 on the clock. Colin answered with another basket to give College Heights a 52-46 advantage.
Then Wheaton exploded.
Lacey snared an offensive board and scored.
Mitchell was fouled by Bishop on a trey attempt, then swished all three free throws.
Zoie Simpson pumped in a short jumper to give Wheaton a 53-52 lead.
Following Simpson’s nervy shot that gave Wheaton a single-point lead, Colin hurried down the court but missed from close range. Simpson cleaned the board for Wheaton as the clock passed the 2:00 mark.
Then Wheaton’s Lombard put the ball and the game in the hands of her seniors. With Mitchell running the point, the Lady Bulldogs went to an all out stall. Considering the number of steals College Heights had come up with in this game, stalling with a one-point advantage was a gutsy call. But Lombard trusted her girls to get it done. College Heights finally conceded the chess match and fouled Mitchell with 44 seconds remaining. She knocked down both shots for a 55-52 lead.
Goostree fouled Colin, but she missed the critical front end. Fouled by Burk on the rebound, Goostree hit both shots for a 57-52 lead with 19 seconds to play.
Dagger.
Wheaton cruised to the finish with Lacey and Goostree hitting late free throws to clinch the 60-54 victory.
“IN THIS MOMENT”
In the game’s final minute, leading by 55-52, Wheaton’s Lombard called a last strategy time out.
“I told them, this is it ladies!” she said. “Both teams want it or we wouldn’t be here tonight in this moment. It’s going to come down to who wants to fight for it.”
Wheaton improved to 21-7 with the win and will play the Miller Lady Cardinals in a Class 2 sectional game on           Wednesday, February 27 at 7:45 PM at Carthage.
College Heights finished the season at 19-8.
Wheaton scorers: Hallie Mitchell, 23; Rachel Lacey, 13; Zoie Simpson, 10; Tori Goostree, 8; Monica Hinojosa, 4; and Alyia Prewitt, 2.
College Heights scoring: Emily Colin, 27; Grace Bishop, 14; Catherine Secker, 4; Kaynahn Burk, 4; Lainey Lett, 4; and Madison Whitmore, 1.