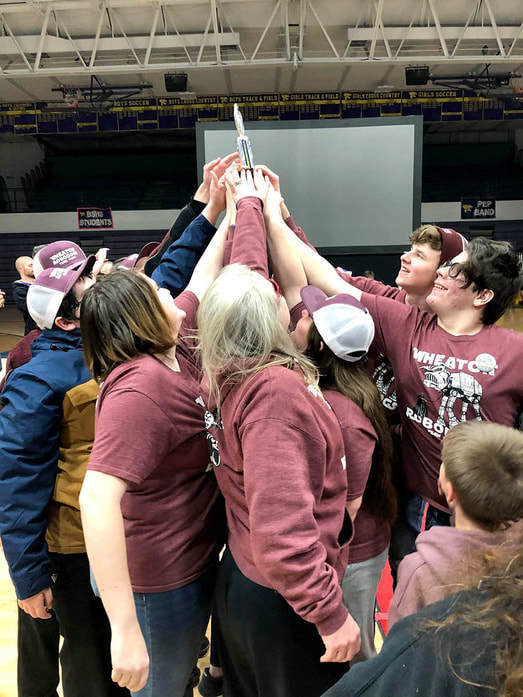 For the first time, the Wheaton Robodogs are headed to State. The team of nine students will compete in March to try to earn a spot at Worlds only four years into the school’s robotics team’s career.

The robotics team is coached by Wheaton teacher Pam Peterson. However, Peterson looks at her role more as a supervisor and adviser, the team is led by students, each one of them fulfilling a specific role to aid in the team’s success.

For competition, teams are scored on not only their robot’s ability to navigate a function and complete the challenges, but the team is also judged on their documentation of all that they have learned and how they have designed and changed their robot for competitions. On top of the competition items, the team also uses a 3-D printer to design keychains and other items to sell to help fund their robot each year, so some marketing and community outreach goes into it, as well.

This year, the Robodogs went to five competitions with the last being the Western Qualifier Conference in Kansas City. It was in Kansas City that the team learned they had earned a place at State.

Peterson said, “I think we knew we could make it at our last match when we were at Drury. We knew the robot was running really well then. We were one place out at that point [to qualify for state]. We were excited about the Western Qualifier Conference at Kansas City.”

She added the team did well this year thanks to the documentation efforts. She said, “It’s kind of a 50/50 split on if your robot runs really well or do you have everything documented really well. This year, we were able to have everything documented really well. We have a full two notebooks of documentation. We learned the hard way if something has changed, whether it’s one piece of code or a wheel on the robot, you document it and you justify it and say why you did it.”

With all of the students working together, each of them is a piece of the puzzle that earned Wheaton the honor of State competition this year. The teamwork is what makes or breaks the team, and Peterson said that is also what she hopes the kids learn from the robotics team experience.

She said, “The one big thing they will also use is to be a part of a team and communicate. That has been our biggest takeaway, and whether they choose to do STEM or meteorology or go into the Army, they will continue to use the communication skills and teamwork to get through their everyday in adult life.”

The way the robotics meets are organized also encourages teamwork instead of strict competition. Peterson explained, “Unlike basketball where you come in with your game plan and it’s a  secret, we get to communicate with the other teams because you never know who is on your alliance that time, and you want to be able to benefit others the most. A lot of the other teams are more than willing to help, as we are.”

Each of the students who is on the team has different reasons they joined or enjoy participating. Jacoby Butler shared,”I did it for the extra credit I needed. BUtthen after I joined, I started liking it a lot more than I expected.”

Tasha Graves helps with the documentation side of the team and joined because her sister was in STEM. She said, “I like being able to organize everything and help the team have what we need in criteria for more than just the robot working.”

Brittany King said she decided to join after helping another team member with an art project related to the team. Now, she helps with the documentation for the team.

Cade Woolaway has been on the team for the entire four years of its existence, and he took the initiative to learn coding to be able to program the robot. He said, “I have always had a fascination with science and mathematics and this is really one of the more educational programs as far as being into science and mathematics. Being able to think of something in your head and design it and make it work is really cool. I’ve stuck with it.

“My freshman year, I had to take over programming, and it was watching a lot of YouTube videos and a lot of failures to figure it out.” Woolaway went on to help others learn coding for the team.

“I got into it mostly because it was really interesting to me. Our school has a STEM class for junior high, and I decided to take that and got into it and really wanted to take the high school class,” said Zane Smith.

Coy Harper, described by Peterson as a jack of all trades, joined because his brother was one of the founding members. Since, Harper has filled in anywhere the team needs.

One team member, Ian Castro, even plans to go into engineering.

But one large component of the Wheaton Robodog team they didn’t expect initially is community engagement. Improving their outreach to reach more people to let them know what they are doing is helping them raise funds to be able to compete. Robotics is a very expensive extracurricular to compete in.

The students have even presented to companies like Tyson and EFCO. Through those presentations, they have earned donations as well as orders for promotional goods like keychains they design and print at the school.

Multiple groups and companies have already supported the team by having them make keychains for them.

Without that support, the team wouldn’t be able to compete and learn valuable lessons.

Butler explained what the team means to him. He said, “For me, what I’m going to use the teamwork for is that I’m going to enter the Army in June. I really like the fact that I’ve been able to be a part of this team and grow with them and help them get to state and everything. I’m glad I can work on teamwork here because I think it’ll help me in basic training. It’s never about one person; it’s about the whole team. If one person is in trouble, everyone is in trouble.”

The Wheaton Robodogs will compete at State on March 7 at  Missouri S&T in Rolla. The top ten teams at state competition will go on to compete at Worlds Competition in Houston, Texas