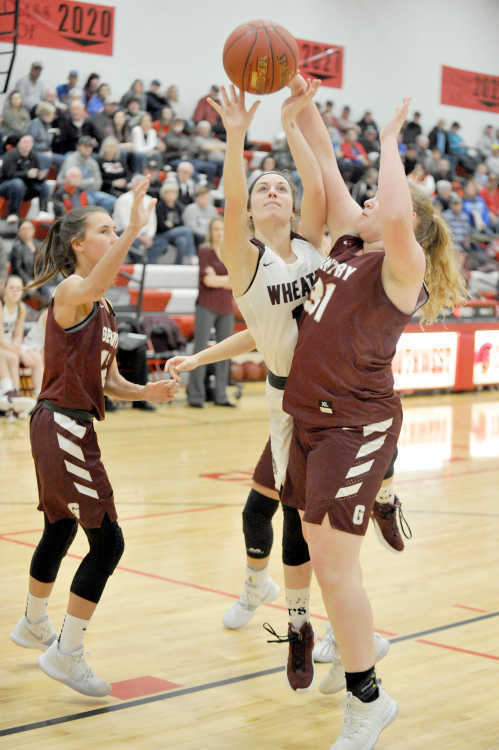 From Zero to Hero

Four years ago, after her freshman-laden Lady Bulldogs lost every game in the Southwest Holiday Tournament, a dejected Jessica Lombard answered questions about what her young team needed to do in order to grow and come together.

Lombard gave measured responses, but also drove home the point that her players had to buy into to each other and into her way of coaching.

Jessica Lombard, Wheaton coach discusses strategy with her team during a time out Saturday night in Washburn. Chad Hayworth/Special to the Cassville Democrat

This year, the frustration of growing pains was erased, and all the hard work was validated when the Lady Bulldogs won the the fifth annual girls tournament with a 61-56 overtime decision over Gentry

“I am so proud of these girls,” said Lombard. “We are senior-dominated, and like I’ve told them before, it takes time to build a program. Right now, we are for sure at our peak this season.”

Wheaton came into the tournament as the No. 1 overall seed and dispatched Southwest and Exeter to reach the championship match.

The tournament title was anything but easy. Gentry rallied from a nine-point third-quarter hole to take a 48-45 lead with 45 seconds left in regulation.

Hallie Mitchell sunk a 15-foot jumper with 17 seconds left, and then Rachel Lacey stole the ball at halfcourt and raced to the lane before getting fouled with 2.3 seconds left in the game. Lacey hit one of two free throws to send the game into the extra session.

“A lot of this game showed our maturity,” Lombard said. “Our maturity on the basketball court and maturity in knowing just because we are down, we don’t give up. The girls played with so much heart. We are a family. These girls have played with each other since they were babies. They know how one another work, and tonight we showed that.”

Gentry took the initial lead in the overtime session with a 3-pointer. Mitchell answered that bucket with her third triple of the game, one that would have been good from NBA range. They Lady Bulldogs also took care of business from the free throw line during the free hoops period with a perfect 8-for-8 performance. The Lady Bulldogs took a lead on Mitchell’s next two charity tosses and never trailed again.

“This is a big-time win against Gentry,” Lombard said. “They are a big-time program and it was exciting to get this win. Tonight, I believe is going to push us to go into our conference season.”

in large part to Tori Goosetree and the offensive rebounding and put-back ability fo the Lady Bulldogs. but the Lady Pioneers kept it close throughout the first 16 minutes. The Lady Bulldogs held a 25-19 edge at intermission.

“One thing we have to work on is keeping the lead once we get it,” Lombard said. “We led by 12 in the first half and blew it.

“That is our biggest problem is handling a lead against good teams and knowing how to handle that pressure.

“I also want to say that our freshmen, Monica Hinojosa and Lori McNeil, came in and did a great job as we battled a little foul trouble.”

Goostree and Lacey were named to the All-Tournament Team. Mitchell was named the Cassville Democrat Southwest Holiday Tournament MVP.

Wheaton travels to Galena on Thursday.