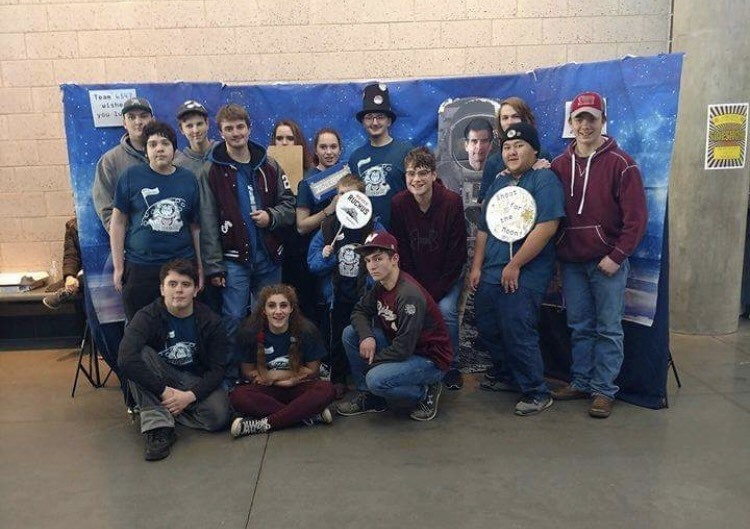 FIRST®️ Tech Challenge Team 11659- The Wheaton Robodogs from Wheaton High School was proud to represent Wheaton at the Missouri/Kansas West Conference Qualifier. The team traveled to Blue Springs, Missouri, on February 9, 2019, to compete for an advancement to the Missouri Championship. Thirty-six teams from across the region were vying for high scores on the field and awards.

Team 11659 had an amazing day “running” their robot and meeting with the judges. The team is proud to announce that they received 3rd place in the Connect Award. This recognition means the team is connecting the dots between community, FIRST, and the diversity of the engineering world. This judged award is given to the team that most connects with their local science, technology, engineering and math (STEM) community. A true FIRST team is more than a sum of its parts and recognizes that engaging their local STEM community plays an essential part in their success. The recipient of this award is recognized for helping the community understand FIRST, the FIRST Tech Challenge, and the team itself. The team that wins the Connect Award aggressively seeks and recruits engineers and explores the opportunities available in the world of engineering, science and technology. This team has a clear business or strategic plan and has identified steps to achieve their goals.

The last award the team was awarded with was 2nd place in the Control Award. The Control Award celebrates a team that uses sensors and software to increase the robot’s functionality on the field. This award is given to the team that demonstrates innovative thinking in the control system to solve game challenges such as autonomous operation, improving mechanical systems with intelligent control, or using sensors to achieve better results on the field. The control component should work consistently on the field. The team’s engineering notebook must contain details about the implementation of the software, sensors, and mechanical control.

The team did not advance, but learned so much and is excited to start planning for next year. The team appreciates all the support they have received from their school, community, and all the sponsors who donated time and their interest. If you’d like to learn more about the FIRST Tech Challenge program or how you can help sponsor or mentor the students, please contact Pam Peterson at ppeterson@wheatonschools.org.

Accomplished inventor Dean Kamen founded FIRST®️ (For Inspiration and Recognition of Science and Technology) in 1989 to inspire an appreciation of science and technology in young people. Based in Manchester, N.H., FIRST designs accessible, innovate programs to build self-confidence, knowledge, and life skills while motivating young people to pursue opportunities in science, technology, and engineering. To learn more about FIRST, go to www.firstinspires.org

Missouri and Kansas events are handled by FIRST Tech Challenge Missouri. Their website is www.stlfirst.org